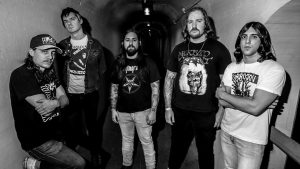 Frontman Riley Gale says he doesn’t mind. He understands.
“You look at classic albums like ‘Behind The Realms Of Madness’ by Sacrilege or ‘Best Wishes’ or ‘Age Of Quarrel’ by Cro-Mags, that’s the apex of what I like about aggressive music and the band feels that way too, but we’re very much trying to be ourselves,” he says trying to make us feel good about ourselves, but still making us still feel like idiots for sleeping on such a vital new voice in thrash metal. “Any band wants to have their own identity but our band is almost based on not having an identity so to speak. It’s an interesting place for us to be in ‘cos as we’ve got bigger, people have asked, ‘Well, what are you about? What’s your image?’ and well I don’t really have one. We get up there and do what we do, take it or leave it.”

We’ll take it. As their new video for single ‘Executioner’s Tax’ shows, ‘Nightmare Logic’ looks to be the thrash album of the year. But if you read Pitchfork, you’d know that. The American music site went out on a limb last year when it reviewed Metallica’s ‘Hardwired… To Self-Destruct’. It said: “Even after repeat listens, one can’t shake the feeling that in 2016, the legends’ students have become their teachers in terms of both sheer volume and political gravitas; those looking for fresh thrash, in its purest, most primal form are better off listening to the likes of Vektor, Power Trip, or Iron Reagan, who wave the torch of their forebears with considerably more gusto.”

“I think it’s a massive compliment,” Riley says when we ask him what he felt about such high praise from one of the globe’s most influential tastemakers. “I haven’t got to sit down with the new Metallica album yet. I saw a few videos and I heard a riff or two in there that I thought was cool, you can tell they’re trying to go back to their old ways. And I’m glad that someone can go out of their way and say to people who like the new Metallica album, well if you really like this mediocre piece of thrash, then listen to us. I would never dare say that we’re a better band than Metallica obviously. We don’t have a catalogue of classics, but if you’re talking pound for pound, their new album versus our new album, then yeah, I’ll fucking say it. Our album is probably better. It’s more lyrically in tune to what’s going on these days. We’ve got some fresh ideas and are bringing in fresh influences that even Metallica hasn’t thought to do before.”

‘Nightmare Logic’ is out February 24 through Southern Lord. They might not be performing at The Grammys just yet but they’re one to watch… or should that be should have been watched since 2013…