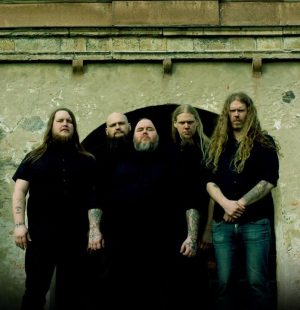 Even if their main composer and guitar player Ola Blomqvist – former head honcho of Sweden’s I Hate Records – strongly affirms this is no public relations masterplan, because ever since their inception back in 2004 the epic doom defenders of Griftegård (old Swedish word for ‘graveyard’) have been cultivating a certain aura of mystery around them with only a handful and carefully selected number of shows and even fewer releases. With Thomas Eriksson from Year Of The Goat fronting, they got started right after the premature demise of the greatly promising yet desperately short-lived The Doomsday Cult with whom they initially shared three members. “It’s funny you’re mentioning this because these days, people rarely mention the two bands in the same sentence and if it happens, it is old school people like yourself,” Blomqvist shrugs. “Now, would Griftegård have existed if TDC continued? The answer is yes, simply, because I needed to express that specific concept.”
Heavily mystical in its lyrical approach, their 2009 debut album ‘Solemn. Sacred. Severe’ was sometimes mistaken by some as Christian metal while as Blomqvist clarifies that it’s true he’s “truly fascinated by the religious aesthetics and their inherent effect on the human psyche/soul and overall about the beautiful and catastrophic consequences of power and control”, it couldn’t further from the truth. If God was a central character in his texts, it was his vile and merciless version “from the Old rather than New Testament-mould. This being said, there’s a slight change on the horizon on our next album. Our debut had almost a therapeutic effect on me, like a closure of sorts. So, now I have a renewed interest in the mystical side of Christianity and other directions of religious faith.”
Sadly, after two further low-profiled splits with Count Raven and Lord Vicar, they’ve suffered a personal tragedy with the loss of their original drummer. After a two-year silence, their new two-track EP ‘The Four Horsemen’ (Van Records) is supposed to pave the way for their long awaited second full-length: including a new eight-minute-plus song that will be re-recorded for their sophomore album (‘A Beam In The Eye Of The Lord’) and a surprising cover of Aphrodite’s Child, the late ’60s psychedelic group that launched the careers of Vangelis and Demis Roussos. However, when you’re reminded that the original was part of a folly LP of sorts called ‘666’, it soon starts to make sense; “We’ve been wanting this cover for a long time, since 2010 or 2011 and yes, its lyrical theme made it hard to resist. Then, after a year or so, we realised that the Devil’s Blood had done it live. This did however not kill the idea of giving it our treatment, we all loved the song and knew we could do it justice and we also felt that our version would differ enough from TDB’s version. Then, in 2013, our drummer Jens Gustafsson died and in March 2014 Selim [Lemouchi, The Devil’s Blood] passed away. Now, since TDB and Griftegård go back together a long way we felt it natural to approach Farida [Lemouchi] of TDB about the possibility of doing the cover with her in order to honour both Selim and Jens. The result became that EP and in May, at the Acherontic Arts Festival in Oberhausen, Farida did the song with us live. Full circle.”
As for that damn sophomore… After a sigh, Blomqvist reveals that he has “talked about it on a number of occasions during the past six years and it has yet to happen so I don’t feel all that comfortable going into detail about it. What I can say though is that it will be called ‘An Orgy Of Surrender’ and that the cover art has been nailed years ago. We rehearse regularly and we have a couple of songs ready and lots of ideas. Fingers crossed I hope to be able to answer a new interview signed by yours truly regarding the release of the album within a year.”

STOP PRESS: Griftegård are no more. They split up on November 19. This article was due to be printed in Issue 16 but we still felt you should read it. We wish the band all the best in their future endeavours