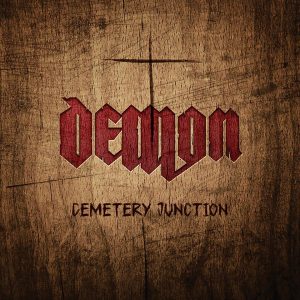 We all love the New Wave Of British Heavy Metal bands and those myths of some talented, some simply filled with passion and dreams, but all who left us a legacy of few but classic songs. And not all made it big like Iron Maiden or Def Leppard; there were the lesser known bands kept alive through influencing newer bands like Metallica. Then there are bands who reunite for one-off live shows such as Brofest or Keep It True, and whatever it brings. There are bands who remember their music only as their youthful folly and are happy to reissue their songs on compilations or limited edition re-releases, and then there is Demon.

Formed in 1979 and part of NWOBHM with their first two ‘more classic than classics’ albums (‘Night Of The Demon’ and ‘The Unexpected Guest’), they followed a different path with many line-up and musical changes and so far they have released 13 albums! Even if they tried, they never reached commercial success, but they at least composed memorable albums, even when metal was at its lowest ebb. ‘Cemetery Junction’ is the new demonic offering and only singer Dave Hill remains from the original line-up. Well, it’s not so ‘demonic’ and if you are looking for a new ‘Night Of The Demon’ or ‘Don’t Break The Circle’, you won’t find it here.

However, if you have followed the other albums of Demon, you know what to expect, and that dynamic and catchy hard rock like ‘Are You Just Like Me (Spirit Of Man)’ and ‘Life In Berlin’. More melodic moments are also present and correct, and as always, the voice of the 62-year-old Hill is stellar.

What is also notable in Demon is the lyrical content. They always dealt with a variety of themes, from fame and war, to society and daily wisdom. You have to love lines like “if you fight for freedom, chances someone will go free”. On the other hand, not all songs are on that same poetic level and no matter how much we love this band, we know that they still play music for their devoted few fans and their personal pleasure… and whatever comes, comes.