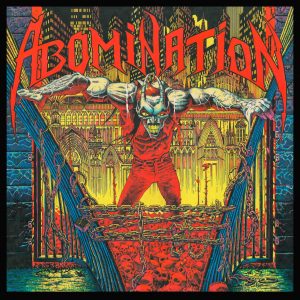 This is a reissue of the debut album of Abomination, the death/thrash project of Paul Speckmann who is more well known for his work with legendary Chicago bands Master and Death Strike.

The ‘Abomination’ album is a much more thrashier affair musically although the easily recogniseable harsh and gruff barks of Speckmann are as commanding and snarling as ever, spitting vitriolic verses about death, destruction, drug addiction, greed, corruption and war.

The riffing and arrangements overall are more complex and technical than his main bands but there’s still an up-tempo rawness to these songs that should most definitely appeal to fans of the aforementioned bands Mr Speckmann fronts. The production is rough and ready; overly-polished this is most certainly not. There’s a very organic feel to the whole album, the drums pound and thud away with an old school denseness over the primitive thrashing rage of the guitars and bass. One minute it’s up-beat and punked-up and the next more mid-paced, all driven by a quick-footed double-kick attack.

Even though this album was originally recorded and released in 1990 it hasn’t lost any of it’s edge or charm and stands up very well among newer releases. Underrated and unadulterated extreme aggression which will hopefully reach more ears and a wider audience this time round. A fast and furious angry mix of thrash and early death metal from a period when the lines were still blurred between the genres.