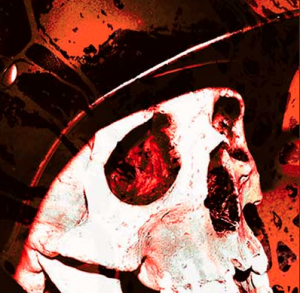 While originality may not be the most prized asset in a young metal band’s arsenal, ingenuity however is hard to refute. Denmark’s Alucarda wear their influence right on their sleeveless vests. To say this album resembles Satan’s Satyrs’ debut is a understatement of gigantic proportions, it is in fact, a clear attempt to walk steadfast in its footsteps, and this is no mean feat. When SS’ Clayton Burgess burst into the larger metal consciousness on the release of ‘Wild Beyond Belief!’ he created a Frankenstein’s monster from parts of Blue Cheer, Electric Wizard and Black Flag, and what an ingenious monster he had made! Alucarda’s monster, while gruesome enough, just lacks a little spark. More problematic is ‘Raw Howl’s lack of memorable tracks, and less energetic sound. But, if you want 37 more minutes of fuzzy doom/punk fun, then you could do a lot worse. Worth mentioning drummer Ferreira Larsen’s other project Demon Head who are a lot more promising. Perhaps something’s afoot in Copenhagen?