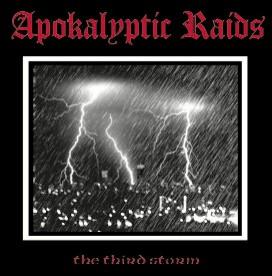 Continuing their campaign of reissuing the band’s back catalogue onto the most fitting of formats, Hell’s Headbangers have pulled the third album from Apokalyptik Raids out of the catacombs, dusted it off and pressed it onto vinyl.

As the trio’s band moniker implies, bearing more than a passing resemblance, some might argue a total sodding rip-off, to that most legendary of trios, Hellhammer and, aligned closely with the similarly-minded German trio Warhammer, the sound and feel here is not applying a hefty dose of the ill-fated Swiss outfit, but a root and branch implementing of the simple idea, ‘what if Hellhammer had not changed one iota and recorded an album (or three) in this day and age?’. On that basis, Apokalyptik Raids succeed, and succeed well. That all-mid-range wall of distorted guitars, the pounding drums, the hellishly tormented vocals are all present, and the songs themselves sound as if the respective members of the band have done nothing but lived, breathed and shat Hellhammer for a couple of decades (which may or may not be close to the actual truth). There are moments, notably in the guitar solos, where the band occasionally produce something that sounds out of context with the template of satanic slaughtering, but

If you just can’t get enough evoked damnation in your life then this and, indeed, the rest of Apokalyptik Raids’ output is worth your time. Mind you, there’s enough ability here to suggest good things if they decided to stop riding on Messers Warrior and Ain’s coattails.