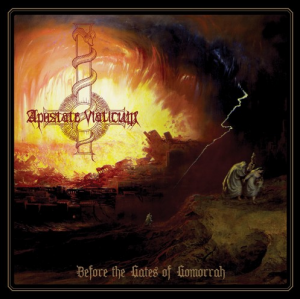 Irish independent Invictus Productions hits the bullseye yet again, with this excellent début from fellow countrymen Apostate Viaticum – seven tracks of churning, morbid death metal of the old school. Biblical themes permeate this extremely engrossing album, from the apocalyptic John Martin masterpiece gracing the cover to the lyrical content of each perfectly crafted song. By turns epic and evil, there is a truly pissed-off sound to this music that makes it more than just another run-of-the mill sequence of inane blasphemies.

The “balls-being-torn-off” vocals reek not only of Becerra and Van Drunen, but also of hardcore, or maybe I’m hearing shit that isn’t there? Actually, the Dutch reference is pretty solid and holds for the rest of the music too, for those of you that need pointers – somewhere between ‘Consuming Impulse’ and ‘Altars Of Madness’, lies the atmosphere (and a fair amount of the sound) of ‘Before The Gates Of Gomorrah’.

Perfect production and well-honed songwriting have resulted in an album that holds the attention all the way through, with sounds running the gamut from frantic, pounding thrash (special kudos for the drumming, truly world class) to plodding marches and mid-paced doom dirges. The title track and ‘Anathema Inherent’ are personal favourite examples of the excellent craftsmanship on show, but the whole record is refreshingly consistent – serious riff and soloing chops on display throughout too, wondrous, spiralling, gnarly runs of morbidity that get better with every listen. A revelation!