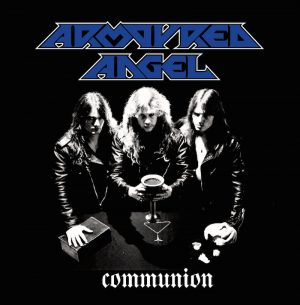 Quite possibly, having formed in 1982, Australia’s first metal band to gravitate towards the extreme end of the spectrum, Armoured Angel lasted until the early 2000s before calling it quits. In that time, they recorded a number of demos and EPs. This recording was the band’s third demo; originally issued in 1990.

The four tracks are each undeniably fine exercises in thrash/speed metal, with the concise songwriting given a delivery and professionalism that, as much as it delivers force and authority, also demonstrates why Armoured Angel were left at the starting post. Mortal Sin came to prominent international attention and a major label deal thanks to their deft and timely utilisation of Metallica’s well-known template, while the likes of Sadistk Exekution were beginning to vomit forth the ‘take-no-prisoners’ brand of chaotic fukkery with which their name will forever be associated. For Armoured Angel, ‘My Fist Your Face’ is an undeniably ‘take no prisoners’ calling card, dripping with brooding content, tight down-stroked guitar work and a similarly tight and forceful production. Yet put it into context whereby this recording is not only sandwiched between the aforementioned bands but also against the new breed of bands that were pushing into death metal territory, AA could, despite their undoubted power and poise, almost be seen as the old guard in the world of extreme metal at the time.

Now given a chance for reappraisal, ‘Communion’ provides a hard and authoritative take on the more polished end of thrash.