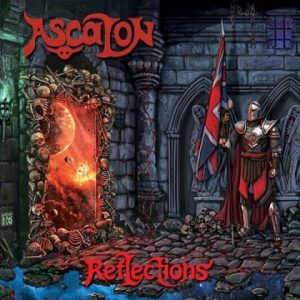 Ascalon, the heavy metal troopers from Lancashire, UK present their debut album ‘Reflections’ via No Remorse. Forged in the classic NWOBHM tradition, ‘Reflections’ is an eight-song journey through an epic heavy metal world (as depicted in the album’s garish artwork), with some speed and power metal influences. At only 35 minutes long, the release doesn’t waste a riff, and boasts exceptional guitar work that makes the band and their album standout.

Ascalon’s style is defined by their duelling guitars with traditional galloping rhythm parts, an abundance of lead harmonies and clean vocals. Though it has a recognisable timbre, Matt Gerrard’s voice is rather limited in range, but this is compensated by the vitally it emits and the perfect fitting to the instrumental parts. The album’s production doesn’t flatter the vocals but, at least, is bringing out the best of the guitar harmonies and riffs.

The songs are consistent in pace and sound, with one instrumental ballad, ‘Outlaw’s Hymn’, which combines acoustic passages with some epic lead guitar. ‘Red Leather’ and ‘The Enforcer’ are two other songs worthy of special mention, having a more interesting structure, changes in rhythm and some ingenious solos.

Overall, ‘Reflections’ isn’t a game-changing album for heavy metal music and it likely won’t be the best one from Ascalon, but it does gives us an appealing glimpse of the band’s potential and whets our appetite for the great things that we can expect from them in the future.