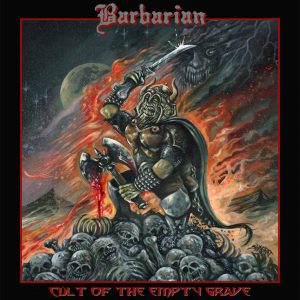 A third album from these Italian warmongers that worship Venom, Hellhammer, Celtic Frost and Manowar. Seven harsh tracks filled with blood and sweat, deathly roars, early black and thrash influences and a NWOBHM touch in the vein of Atomkraft. There is a strong epic vibe in the opener ‘Bridgeburner’ and that continues all over the album, as it seems that old Manowar is a band that this power trio admires a lot and that’s not bad at all.

However, while the hooves of the barbarian cult are smashing the posers, the fun ends there. This album won’t change your life. Perhaps Barbarian don’t really care what you think though. Do not expect emotional guitar solos, only Bathory’s ‘Asatru’ period guitar screams and Grand Magus’ epic riffs filled with mud along with pounding drums while Cronos and Tom Warrior are laughing in a corner.

You don’t have to complain for anything though, my friend. It’s just 34 minutes and that’s all it needs to be.