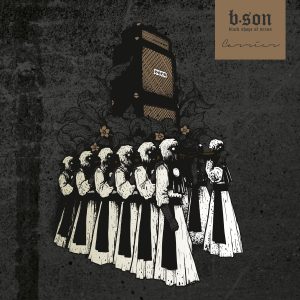 German doom absurdists, Black Shape Of Nexus, have pulled out all the stops for fourth album ‘Carrier’. The six-piece take a no holds barred approach to their music as it is, refusing to be tied down by the ‘drone/doom’ label they are so often pigeon-holed with; however, this record goes to extreme lengths in running the gauntlet between genres.

No two tracks sound alike; huge swathes of abyssal, trudging doom cascade into acrid, low-end buzzes of drone. Just when you feel you are getting familiar, perhaps even comfortable, with the pace and dynamic it’s quickly switched up again, throwing in passages of light-hearted jazz and romper stomper sludge chug-a-thons.

It’s music with undeniably schizophrenic traits, which makes for an intense and difficult listen. The description may sound ridiculous, nonetheless, many bands have tried this disjointed and unpredictable style of playing and come off as “wacky for the sake of being wacky”. B·SON manage to execute it with an air of refinement that conveys genuine talent and impressive songwriting capabilities.

‘Lift Yourself’ is a monstrously bleak highlight, with an airy ambient atmosphere, that descends into gut-wrenching noise, before lurching forth into hardcore tinged chaos – it’s the musical equivalent of driving along at 80mph before slamming on the emergency brakes. ‘Carrier’ will undoubtedly take several listens to really crack, as it’s most certainly not the most accessible of albums, but once it clicks with you it’s a rewarding pay-off of pure, unadulterated musical madness.