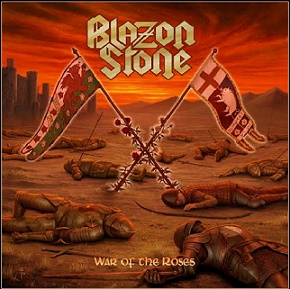 You know what, I really liked the latest Running Wild album ‘Rapid Foray’. However, after a few spins, I can’t listen to it with the same passion. Hell, I even bought the limited edition deluxe box set! But forget Germany, let’s go to Sweden; there is a guy named Cederick Forsberg and he has a band called Blazon Stone (obviously inspired by the same titled Running Wild album). In 2013, Ced released the album ‘Return To Port Royal’ (more Running Wild please!) and his music was a pure homage – pirate metal worship. Why do I mention only Ced? Well, he handles ALL the instruments besides the lead vocals. ‘War Of The Roses’ is Blazon Stone’s third full-length album, and meanwhile, Cederick has also recorded around seven or eight more albums over the last five years with other bands and projects (Rocka Rollas, Breitenhold, Cloven Altar etc). If we could gather the best songs of those three Blazon Stone albums and give them to Rolf Kasparek and ask him to record them with Majk Moti on guitars, Jens Becker on bass and Jorg Michael on drums, we could have the best metal album of the decade and one of the most glorious comebacks ever. Not sure if you get my point here but if you miss Running Wild, then this is your band. If you are a progressive, open-minded, “looking-for-the-next-new-thing”, then move on, please. Nothing to see here.