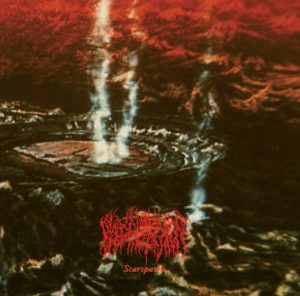 Seeing the band’s name and the label releasing the album, you could expect some total Incantation-worship here, but you’d be wrong! Blood Incantation are indeed a death metal band, but they bear no similarity with their semi-nameskae, opting for that on-trend ‘atmospheric’ death metal.

For their first full-length, Blood Incantation manages to release a spatial album, captivating from beginning to end! If you manage – which is not that easy – to go through and enjoy the 13 minutes of the opener ‘Vitrification Of Blood (Part 1)’, then the rest of the album will be like a ride in the park. ‘Starspawn’ is a mature album for such a young band, filled with technical aspects that hint that their members certainly listened to a lot of Gorguts, as well as early-Slayer, or Death’s ‘Human’ for hypnotic inspiration or some of the fretless bass lines.

Add to this some Suffocation-inspired brutality, a more modern touch in line with bands like Zealotry, and you’re going to start to get to the heart of ‘Starspawn’. A really killer debut, let’s hope the guys hit the stage somewhere near home soon!