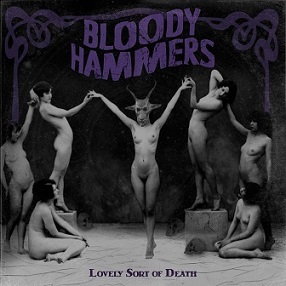 Working very quickly and releasing four albums in four years, no one can accuse North Carolina’s Bloody Hammers of lacking creativity. Last album ‘Under Satan’s Sun’ displayed occult-doom pastiches littered with Hammer horror tropes and Munsters-etched gallows humour, which is naturally something that we expected them to expand upon. However that is not exactly the case with ‘Lovely Sort Of Death’

Perhaps frontman Anders Magna is in a particularly gloomy mood as largely the doom has been dispatched here and the band have got their real misery on stylistically, looking downcast with music more in a darkwave, gothic, electronic and even synth-pop tone. It’s not even in the previously hinted Type O vein either as very British post-punk vibes as unexpected as The Chameleons and The Danse Society are cited here.

Anders’ opulent, dour tones suits the music perfectly and this also allows keyboardist Devallia to go retro in an entirely different way with motifs from John Carpenter to Tubeway Army acknowledged. Occasionally the fuzz-drenched doom creeps back in on songs like ‘Shadow Out Of Time’ but on the whole one wonders if this is an album that’s a sidestep from the norm or a path that the group are going to continue to develop.

One thing’s for sure, it’s certainly thrown the bats among the pigeons!