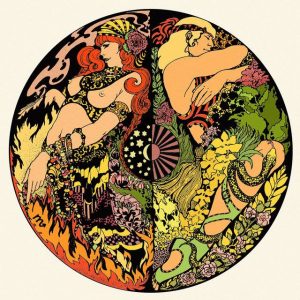 On their second full-length studio album, ‘Lady In Gold’, the Örebro-based troubadours known as Blues Pills have returned assured and totally in their element. The music on this album is so much more than ‘another Swedish rock band with 70’s style/influence’: it’s modern music that stands on its own as an uplifting reminder that great, new rock ‘n’ roll really does exist and it’s not being played by reformed jaded souls looking for a pay cheque and a taste of their former glory.

Instead of going for the obvious round two direction of muddy hard rock with a vintage feel and muffled vocals so oft pursued by bands branded with the retro rock label, on ‘Lady In Gold’, Elin Larsson’s powerful, soulful vocals are shining front and centre. With an excellent rhythm section supporting her, courtesy of bassist Zack Anderson and drummer André Kvarnström, great guitar licks from Dorian Sorriaux, and this time around, plenty of organ and even backing vocals, each song soars into polished perfection. The result is a mesmerising soul album soaked in lush harmonies and melodies that make you want to sing, dance, party, cry and dress like a flamboyant bright young thing.

The title track is catchier than ever and the song which follows, ‘Little Boy Preacher’, wastes no time in establishing the anthemic tone present on this album. The music doesn’t let up, going from strength to strength. It is perhaps the first time Blues Pills have fully captured the energy found in their much heralded live performances on a studio recording. Here we have a taste of the magic; music that makes you excited again.

Followers of Blues Pills may recognise the album’s closer, ‘Elements And Things’, a Tony Joe White cover from their live sets this past year and though excellent, it merely hints at the amazing growth that has occurred with this release. ‘Lady In Gold’ is a rock and soul classic waiting to be discovered by audiences well beyond the ‘classic’ or ‘hard’ rock niche that has so far embraced the band and brought them success. It showcases Blues Pills as a band who, if given the chance, by the “mainstream masses” could conquer the world.