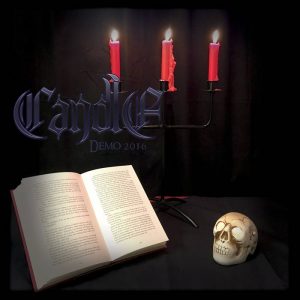 The New Wave of Traditional Heavy Metal (“NWOTHM”) tradition is a tricky one: the sound is, by definition, old-school. It results in some bangers, but it’s not exactly easy for a band to craft something that is unique and traditional all at once. Sweden’s Candle have taken a crack a doing just that.

The band’s production is reminiscent of Witchfinder General, with the twin-guitar attack lurking in the gloomy lower frequencies, allowing melodic bass lines to cut through to the front of the mix. That said, the record isn’t without faults. Opening track ‘Betrayal’ appears to fall apart, with dud notes scattered across the tune as the entire band seem to lose their place. When reaching for the high notes, singer Erik Nordkvist falls a note or two short, marring the tracks with a flat performance.

However, a lot can be forgiven on a demo. The band redeem themselves on ‘Frozen With Fear’, complete with a thunderously heavy, guitarmony-driven section towards the end. Record-closer ‘No Peace For My Soul’ includes a couple of face-melting (if abruptly placed) guitar solos. If the band take what they’ve learnt from this record and run with it, they could very well become underground royalty.