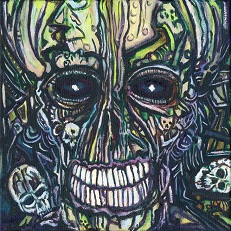 Sharing ex and current members with the likes of Conan, Black Magician, Cult Of The Head and Iron Witch, this Liverpudlian trio shot to notoriety from their very beginnings. Having existed since 2010, Coltsblood have only put out one full-length release (‘Into The Unfathomable Abyss’), using the remainder of their time to play a series of live shows and share split space with fellow heavy hitters Crypt Lurker, Horse Latitudes and Ommadon, and have cultivated a reputation for playing some of the most miserable doom metal the UK has to offer.

Second album ‘Ascending Into Shimmering Darkness’ sees the band sounding murkier still; the opening title-track is a slow, relentless, audible crawl through the very depths of hell. Jem’s glacially paced riffs rumble alongside John’s guttural death roars, creating a harrowing atmosphere that would rival that of the infamous Winter. ‘Mortal Wound’ speeds things up, taking on a tempo that could almost be described as death metal. Jay’s frenzied drumming works alongside skilfully plucked bass, making for a track where the rhythm section does much of the heavy lifting. This is yet another monstrous release from Coltsblood and the death metal influence will make a refreshing change for those bored by modern day vintage amp worship of doom and its counterparts.