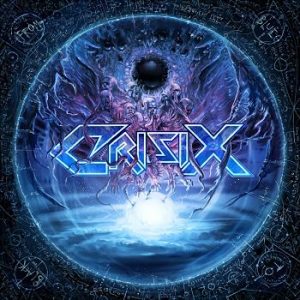 We caught these Spanish ultra-thrashers in London a few weeks ago, opening for Suicidal Angels, Evil Invaders and another unmentionable band. First on a four-band bill, they blew every band out of the water (and my unborn child agreed). They also do everything with smiles so big they look like they’re about to eat their own heads. Not a live review? There’s a reason for including this: Crisix struck me as a band who have fun, play fast ‘n’ loud, but don’t necessarily smash out a super record…

However, having listened to ‘From Blue To Black’, I stand corrected. From the opening track ‘Conspiranoia’, I feel like I’m a ball in an ’80s pinball machine being controlled by a pre-teen high on E numbers with a vision of the incoming hardcore scene of the future (‘Psycho Crisix World’ – also, I think, one of the best songs on the album).

The vocal is spat, veering between a helium balloon and a howling roar, backed up with some delicious gang vocals. There is some filler (‘Five As One’ and ‘Fallen Saviour’ – a bit nu-metal meh), but you shouldn’t really give a shit because this band can play. Tighter than Manowar’s speedo unmentionables, you can barely hear a dropped note on a guitar solo, a badly timed beat-down, or a bungled fill. Every single note and vocal has its place and they do stuff with their time signatures that actually we can’t work out.

They also pay homage to the greats; bits of Carcass, Lock Up, even ‘Toxicity’-era SOAD (sorry) and there are times when you feel like you might have accidentally put on a Black Breath or Burning Love album. The pace of this record is fast. Exhaustingly so, until the title track, ‘From Blue To Black’, which is a bit of a weird one, as it veers into some kind of ‘Crosstown Traffic’ pysch jam mid-way through, which pulls the music off in a really unexpected, ‘I’m-not-sure-it-works’ direction. This record is a non-stop, brilliantly-executed assault that you should return to over and over again. For now, its nap time – exhausted!