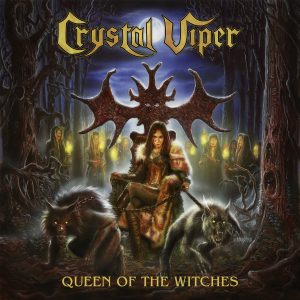 A decade after their debut release, Crystal Viper return with their sixth album. The opening track is the band’s statement: ‘The Witch Is Back’. The voice of Marta Gabriel sounds better than ever and ‘Queen Of The Witches’ is in the band’s usual high standards. Rooted in the legends of the ’80s, it is diverse and catchy with beautiful melodies and harmonies.

“Headbanging” is the key word here and there is extra credit for the wise and powerful production that serves the compositions. While the album storms the speakers, we witness classic ’80s metal songs like ‘I Fear No Evil’, you have ‘When The Sun Goes Down’ which is a cool blend of late-Manowar with Zed Yago and then, there is the album’s highlight, the anthemic hymn ‘Do Or Die’ with Ross The Boss (ex-Manowar) on guitars. In ‘Flames And Blood’, the screaming Witch has another legendary guest on the six-strings with Mantas (ex-Venom, now Venom Inc.).

There are even two ballads on the album but ‘We Will Make It Last Forever’ is a killer power ballad to match the greats and there is another surprising guest, singer Steve Bettney of Saracen, one of the best vocalists of British metal. 2017 started very well and ‘Queen Of The Witches’ is a strong candidate for the best albums of traditional metal this year. Obey the Witch!