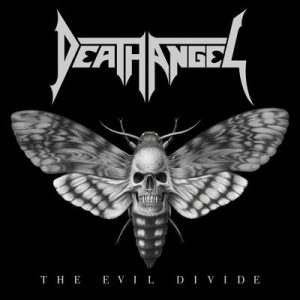 When ‘The Art Of Dying’ first saw the light of day back in May 2004, most of us were led to believe that Death Angel’s studio album number four was the best the band could offer at this phase in its career. Twelve years and four studio albums later the Californian quintet has proved us all wrong by bringing to life one of the finest specimens of honest-sounding, aggression-fuelled thrash metal – a ten track opus that listens to the name ‘The Evil Divide’.

Death Angel have not reinvented the wheel here; they still create compositions based on massive head-banging riffs, catchy vocal lines and flamboyant guitar leads. What makes ‘The Evil Divide’ a better album than say ‘Killing Season’ or its predecessor ‘The Dream Calls For Blood’ is not only the quality of the material but also the performances on offer which are simply out of this world.

In songs like ‘The Moth’, ‘Father Of Lies’ and ‘Hatred United/United Hate’ Mark Osegueda’s vocals sound angrier than the ones he recorded when he was 18 years old while the lead and rhythm guitar work in ‘Hell To Pay’, ‘Break Away’ and… well, every other song in this album will only gain its creators the highest of praises. Know many albums released this year which finish with a composition as commanding as ‘Let The Pieces Fall’? I thought so too…