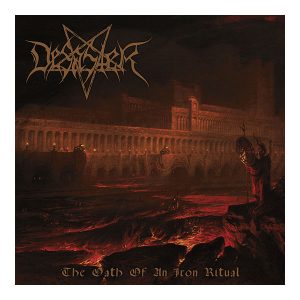 Long-running German teutonic black thrash brigade Desaster return with their eighth album. If you are familiar with the band then you can expect the same musical formula as the majority of their previous full-lengths, it’s definetly a case of black thrash is my business and business is good!

For those unfamiliar with these Rhineland ravages ‘The Oath Of An Iron Ritual’ delivers nine deadly strikes. Classic sharp Teutonic riffing and pounding bass is powered along by the bulldozing drums of human powerhouse Tormenter, with vicious rasping, snarling vocals leading the charge. Desaster epitomise the term blackthrash and have proudly flown their flag of hate since the late ’80s. This release, like the last few albums, is a more straight-forward rabid and raging affair compared to the earlier recordings where quite a lot of medieval melodies were mixed in with the harsh metallic mayhem, although some medieval flourishes do remain such as on closing track ‘At The Eclipse Of Blades’.

Theres a good variation of tempos with the faster all-out thrashing sections complimenting the chugging mid-tempo parts and the slower passages throughout. The use of roto toms also adds to the band’s old school charm!

Desaster have mastered their chosen craft and this aural assault could possibly be their strongest work to date, and that is a strong statement given their very impressive and consistent back catalogue.

They have always had a strong connection to their local ancient history as well as history in general and that is still very evident on the grandiose, striking and epic looking cover of this latest album, which is a painting aptly named ‘Pandemonium’ that dates back to 1841 depicting a scene where Milton’s Satan stands before his diabolical city, a river of lava running past it, a perfect visual accompaniment to the hellish audio assault within.