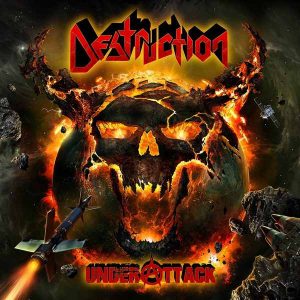 Marcel “Schmier” Schirmer’s return to Destruction in 1999 heralded the most productive phase in the band’s long and turbulent career. Sadly, however, the albums that this trio released from ‘All Hell Breaks Loose’ (2000) onwards, though each having made a decent attempt to provide the listener with something fresh and unique, have suffered the symptoms of the same ‘untreatable disease’. They are fairly enjoyable at the period when you first invest in them, but leave little to your memory the moment your focus shifts onto something else.

‘Under Attack’, the band’s 14th studio album, makes an honest effort to ‘break with tradition’ so to speak and would perhaps have succeeded if the average composition on offer shared the same bombastic nature of the opening same-titled composition, the melodic qualities of ‘Dethroned’ or the thematically-challenging nature of ‘Getting Used To The Evil’. Sadly, as it turns out, the second half of this release contains decently performed but relatively unimaginative compositions, the kind that one has to feel very committed to the band in question and its musical vision in order to offer his/her unconditional support.

The Teutonic legends have undoubtedly put a lot of time and effort behind the creation of this release but that has not paid the dividends expected.