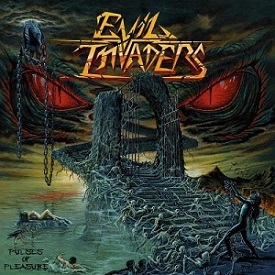 Yet another young thrash troupe lifting their moniker from the classic album vault are Belgium’s very own Evil Invaders, however this is where the similarity with Canadian shredders Razor ends. ‘Pulses Of Pleasure’ picks up from where their acclaimed 2013, self-titled EP left off with its abrasive rifferama inspired by the early Bay Area sound. Think Exodus in a head-on crash with Vio-Lence with flashes of Iron Maiden’s dual guitar solo attack and vocals on the Paul Baloff scale and you’ll get an idea of where these speed freaks are coming from. It’s thunderous and pounding from start to finish and has the attitude and posture in all the right places. Sadly the song-writing isn’t going to see this hang in the ‘Bonded By Blood’ hall of fame but you have to admire their furious energy. Evil Invaders may not be re-inventing the wheel but this is a promising debut.