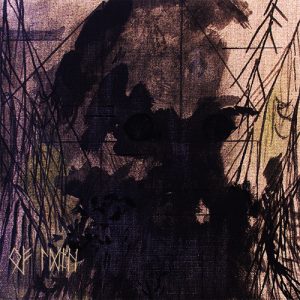 It’s the dawn of man, a group of Neanderthals are sat around their recent discovery of fire, brows furrowed, grunting indiscernibly. Suddenly a time portal opens and through it appears a bass guitar, an amp, pedals and a drum kit. What ensues next is probably the best way to describe debut full-length from South London duo Ghold; powerful, primitive and mind-shatteringly heavy. Ghold produce noise that’s laden in fuzz and reverb but still packing enough groove for it to prove impossible to keep still while listening. Compared to ‘Galactic Hiss’, ‘Judas Ghoat’ and their self-titled demo, ‘Of Ruin’ will probably seem far more restrained and less chaotic, however, it is no less relentless and anything but subdued; the pairing have managed to finely craft the blueprint of their sound to perfection and in doing so have sanded down any rough edges without compromising the raw tenacity of the music. Vocals on tracks such as ‘Saw The Falling’ sound other worldly, tribal in places, and knit perfectly together with the subtle time changes and constant twists in song dynamic.