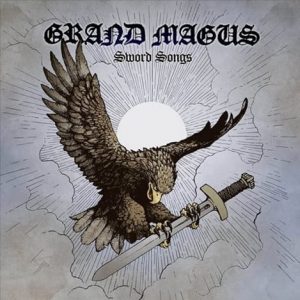 Twenty years as an active band, Swedish heavy metal gangsters Grand Magus have yet to release a bad album. That said, one would be pretty accurate when stating that no album that’s seen the light of day since the release of ‘Monument’, back in 2003, has managed to even come close to competing with the said masterpiece… till now. Yes, ladies and gents: it is the band’s eighth studio offering which managed to achieve what Janne “JB” Christoffersson and co have been threatening to do since they joined the Nuclear Blast family five years ago.

So what it is that makes ‘Sword Songs’ so damn special? While the main recipe for creating songs has remained undiluted over the years, the nine songs that put together this fine album are more direct in their approach, honest in their intentions and heavy in their sound than ever before.

‘Freja’s Choice’, ‘Born For Battle’, ‘Frost And Fire’… choose any song from this album and you are guaranteed to come across a riff that you will want to head-bang to or a vocal melody that you will feel inclined to sing along to. While the stand-out moment of the album is without doubt the five and a half minute ‘Forged In Iron – Crowned In Steel’ we would not be surprised if fans of Manowar will opt for either ‘Varangian’ or ‘Every Day There’s A Battle To Fight’ instead. Play it loud Mutha!