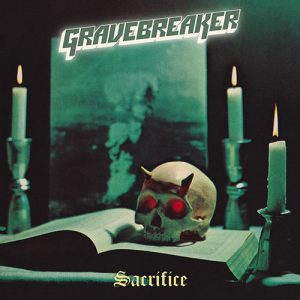 Digitally available since last summer, ‘Sacrifice’ is now getting released in proper physical formats, with LP, CD and tape editions getting out there. Five years after having created the band, and without any official demo under their bullet-belt, this Gothenburg trio recorded a straight-up full-length, and managed to do a pretty good job. There’s nothing very original on ‘Sacrifice’, apart maybe from the fact there’s one guy, nicknamed Fury, handling all the strings. And Fury and his two buddies are paying homage to early ’80s heavy metal; mainly to Judas Priest, but also a bit to Omen and to a lesser extent Mercyful Fate. And they’re adding a little je-ne-sais-quoi of street brawl and aggression, as well as some old-Slayer bits like on ‘Kill And Kill Again’, thus creating catchy songs and giving ‘Sacrifice’ that different aspect, which makes the release more worthy than the latest average old-school heavy metal band. Be ready for cheesy lyrics about street ninjas, demonic priests and just the kind of good time you can have when watching one of those B-series movies!