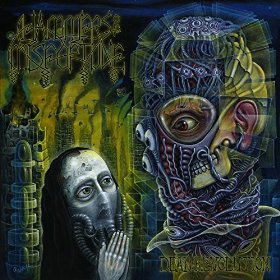 In a metal scene riven by sub-genre segregation, that frequently rewards the ability to imitate over originality, Hammers Of Misfortune’s unique way with heavy metal is a welcome reminder that true quality is oblivious to convention.

Using heavy metal source code as a starting point, HOM embark on a musical voyage that cuts swathes through prog, folk rock and metal to arrive at a musical hinterland all its own. Permitting galloping metallic chug and Jon Lord-style keys to exist alongside the relatively exotic vocal textures of Queen and even The Beatles, this is a record steeped in musical erudition that, through expert craftsmanship, is liberated from the ivory tower and delivered to its rightful home amongst the fist-pumping throngs.

Dense with ideas, the album delivers its payload with measured pace, with the high-excitement soaring vocal sections held in balance with the more cerebral instrumental interludes in a way that allows user-friendly access to the album’s hidden depths.

Riffs resonate with a familiar heaviness that bridges doom and speed metal, whilst extended organ interludes and the unexpected appearance of rootsy American guitar embellish the down-to-earth production with real-world colour for an effective counterpoint to the album’s pervasive sci-fi atmosphere.

The title might announce the death of revolution but hearing HOM’s latest it’s hard not to feel that the revolutionary spirit of radical, game-changing heavy metal is doing well in the afterlife.

In which this valiant collection of Bay Area troubadours once again return to serve up an intriguing and idiosyncratic collection of eclectic metal tuneage. Steered valiantly by guitarist John Cobbet (formerly of Ludicra and Slough Feg, now tearing it up in Vhol), Hammers Of Misfortune are a difficult beast indeed to pigeonhole. At turns progressive, riffy, psychedelic and outright rocking, ‘Dead Revolution’ continues to demonstrate the uniqueness of this talented collective.

Straight out of the gates, ‘The Velvet Inquisition’ sets the tone, warm organs underpinning some driving riffs and the plaintive, pure vocal tones of Joe Hutton. Immediately, the sound is one of organic warmth, an atmosphere that is steeped analogue ’70s tones. And continuing their ongoing mission not to be pinned down, Cobbet and his merry men demonstrate their versatility throughout the record – crunching Metallica-esque chugging on ‘Sea of Heroes’, the Spaghetti Western twang on the breakdown of ‘Here Comes The Sky’ and of course the catchy shanty-isms of ‘Days Of ‘49’ – all topped off with layers of soft vocal harmonies that bizarrely bring to mind Scotland’s ‘North Atlantic Oscillation’ on more than one occasion.

‘Dead Revolution’ is a tough record to get a handle on and wholeheartedly endorse given the wide spectrum of sounds explored – but for those with a taste for the adventurous, there is much to admire within.