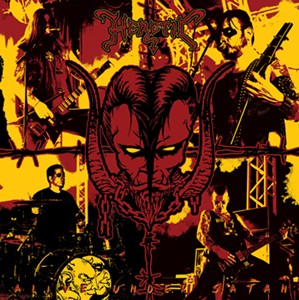 It’s rather hard to forget Heretic after the Dutch mob spunked up 2013’s delightfully entitled ‘Angelcunts And Devilcocks’ album. Now they’re back with a hard punching EP of eight short, sharp, slabs of sleaze, all with Satan at their heart. Rocking in hard with the locomotive outta control bombast of ‘Berserker’, they quickly get their groove on, rattling away with that meaty, bleating elongated vocal rasp of singer Thomas Goat rolling right off his tongue. It’s infectious stuff and as they continue there are all sorts of bands cited in their basic but fun assaults from the contemporary likes of Midnight right back to the past with tracks like ‘Mr Chainsaw’ enthused with the spirit of The Stooges and The Ramones. With simply constructed three chord punk riffing and a flurry of “hail Satan” chants this may well get the devilish attention it deserves and leave Old Nick with a singed bum.