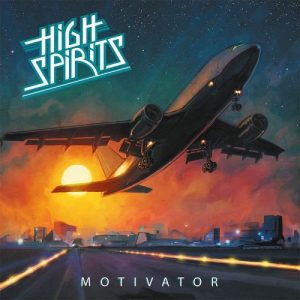 It’s pretty much indisputable fact that High Spirits mastermind Chris Black has one of the best work ethics in the world of contemporary heavy metal; that being said, this claim wouldn’t mean much if Black’s output were a case of quantity over quality. Luckily, Black has a rather delightful habit of writing great songs, be it with Superchrist, Pharaoh, Aktor (my personal favourite) and Dawnbringer.

His keen ear for melody and hooks link all his projects together to form a cohesive body of work that is endlessly enjoyable and loses none of its lustre with subsequent listens. ‘Motivator’ is easily one of the best albums he’s gifted us, a sweeping exercise in uplifting, positive-energy rock. It’s a great improvement on the (decent but slightly sub-par) sophomore album, and in the fullness of time could well prove an equal to the euphoric ‘Another Night.

The twin guitar harmonies and vocals are glossier and more catchy than ever, and it’s hard to imagine ‘Thank You’, ‘Flying High’ and ‘Reach For The Glory’ not being staples of future High Spirits live shows. To be honest though, they could easily play this album twice over and have a crowd baying to hear it a third time. Had they been around 25/30 odd years ago, I think it’s a solid bet that High Spirits would have been playing arenas supporting the likes of Dio (see also Grand Magus…), but for now we get to see them up close and personal – lucky us! Now, if I could only place that oddly familiar riff in ‘Take Me Home’…