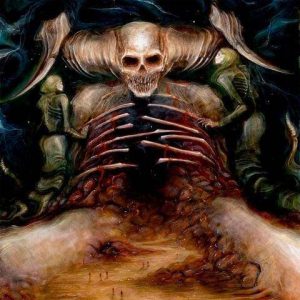 While their first album, ‘The Chills’, was an excellent homage to the late ’80s death metal scene, their second album ‘Ecdysis’ had already begun to morph into a progressive death metal form… And while the artwork of ‘Anareta’, their third album (in four years!), may remind you of Cannibal Corpse’s ‘Worm Infested’, Horrendous have definitely not gone more brutal. ‘Anareta’ is still benefitting from a perfectly-suited homemade production and those killer Van Drunen-type vocals, but the trio have kept on getting more progressive, without losing the death metal energy. Just like Death and Pestilence between ’91 and ’93, Horrendous are transforming into a very special creature indeed, gifted with many talents. There are bits of techno-thrash here and there, passages that would have fit on Cynic or Atheist albums, and still that hugely tangible and present old-school Dutch death metal or early Autopsy influence. These guys are bursting with death metal mastery, and had ‘Anareta’ been released a bit more than twenty years ago, it would be referred to as a classic alongside ‘Human’ or ‘Testimony Of The Ancients’. Horrendous have the potential to get really big!