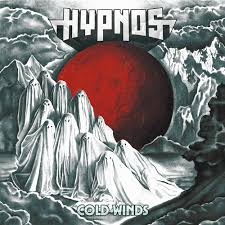 It’s easy to get excited at the prospect of Hypnos and ‘Cold Winds’, their second gifting because, well,…Sweden and Graveyard and NWOBHM, all tickling our collective taste buds at the moment. When you press play on ‘Start the Hunt’ there is even a Rocky Horror Show mish-mash about half way through; a deftly-arranged, hooky stomper that’s positively uplifting … until a flute makes an appearance. Now, in the spirit of objectivity, we will not dwell on the inclusion of this (albeit masterfully played) instrument suffice to say it should only ever be used as an inter-family torture instrument; the aural equivalent of including marzipan in a chocolate cake, dropping a little light piping into a song that has some sweet guitar solos makes our teeth itch.

The record moves on at quite a pace, referencing Maiden in places and some truly satisfying ear-worm choruses – try ‘Cold September’ and good luck letting that one go for the day. There is no denying this band can write a song, play their instruments and Lindgren’s vocal has a mini-Dickinson range and timbre, beautifully deployed in ‘Det Kommer En Dag’, which we think means ‘I secretly hate the flute’.

There’s also some sincerely skilful arrangement in their songs, which can only focused be on in subsequent listens. This record is something of a grower; it’s a well-produced, organised, masterful slice of ultimately derivative music being played in a more radical and exciting way. However, a harsh critic might argue that in a world of Troubled Horse, Graveyard, Witchcraft, Kadavar, this album lacks the freshness and transportive magic of some of these bands’ records.