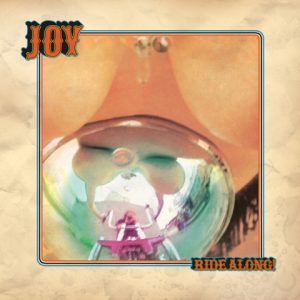 When we first played this album, we had a draw-off to try and encapsulate the mood and vibe of this second album from San Diego-based Joy. Suffice to say, my picture was a ‘murican highway circa 1969 inspired by a biker movie… it also featured pointy shoes and naff jackets but that was a little wide of the mark. You’d be hard-pushed to steer away from such iconic imagery when ‘Ride Along!’ opens with ‘I’ve Been Down’, a track infused with splaying organ chords and some psych guitar spangles and a sort of garage-y, Lords of Altamont-esque vocal. A promisingly evocative opening track for this ten-tune record, featuring guests from Earthless, Sacri Monti and Radio Moscow, as well as a cover of ZZ Top’s ‘Certified Blues’.

‘Misunderstood’ follows the same vein – a warm, fuzzy, rhythm and bass driven song with a hotch-potch of psych, garage and diesel-stained highway. The album leans perhaps a little too heavily on the fuzz for all tastes, as well as there simply being a bit too much going on at times. It’s moments in ‘Going Down Slow ‘ that hoik it back and remind us that there is a greater dynamic at work, with some stripped-back blues structuring that gives a defter (and frankly cooler) touch with arrangement that can get lost in other tracks.

Title track ‘Ride Along!’ is one of the strongest and should feature either as an opener or closer but is done a bit of a disservice as a penultimate track. At times, Joy trades a bit heavily on sound and guitar widdling rather than song writing… it becomes a little sticky and same-same and there’s a sense of no real new ground being taken. However, this is a record for drinking to and driving to (NOT at the same time, obviously) and while you won’t necessarily wear grooves into it, it’s fun times.

And as for ZZ Top homage… it’s a stoned bar-brawler’s punch away from wanting to steal someone’s chopper and taking peyote under the desert stars… a lovely twilight blues jam of a good time.