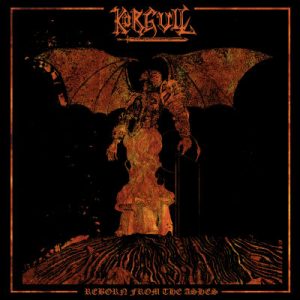 A fourth album from these Spanish thrashers from hell, who love Voivod so much they’re named after one their songs! And, at least at the beginning of ‘Reborn From The Ashes’, the Voivod-vibe is indeed there, so much that ‘Traitor’s Gate’ sounds like Piggy jamming with Desaster or Aura Noir. But after that, and despite all the energy they spend, this album really gets nowhere and lacks Voivod’s catchiness. Lilith’s vocals are neither bad, nor great, a sort of extreme (and tired) Tom Araya, and while their usual cover, this time Razor’s ‘Take This Torch’, really blends into the rest of the album, this also shows that ‘Reborn…’ mainly recycles old stuff without an ounce of originality or renewed creativity. Körgull was originally supposed to be a one-album band, and one can wonder if there’s much value in so much hard work if it’s to release such common black/thrash?