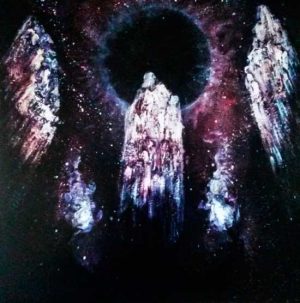 Also known as KSMKRTR, this band aren’t very forthcoming when it comes to sharing info about their identity. We know they’re a quintet from Belgium, founded in 2013, and have the same stylist as MGLA. So let’s concentrate on music: their 2014 demo ‘To The Svmmit’ got repressed by Ván and already showed an interesting band in that ‘religious/chaotic’ murky death/black style that’s been getting popular those past three or four years.

Their first album ‘First Step To Supremacy’ continues in the exact same vein, and shows a more mature band, in control, delivering efficient hymns. If you worshipped at the altar of Arkhon Infaustus, looking for an Irkallian Oracle with more religious intent, abhor the occult doom tropes and organ melodies and who craves chaos, then Kosmokrator has all it takes to reel you in to their cult.

But there’s also a feeling of restraint here, moments where you expect an uncontrolled fury to be unleashed but that leaves you on tenterhooks, moments where the beating suddenly stops before fatally damaging its victim… i.e you.