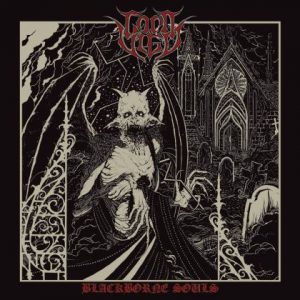 From Greece’s home of true metal, No Remorse records (home to Eternal Champion), Lord Vigo’s quest into epic doom follows in the footsteps of many of the great and good of doom with Candlemass and later Bathory providing familiar sonic waypoints. Seemingly aware that they’re on a well-travelled path, the band throw everything at the album with Deep Purple keyboards, horror samples and a hell of a lot of choral vocals helping liven up what might be a routine trek to doom Valhalla.

When it works, as it does most notably on the title track, Lord Vigo approach levels of epic comparable with their countrymen Atlantean Kodex and show themselves to have a good grasp of long-form song structure that, for the most part, steers clear of tedium and has its own identity thanks in a large part to the in-between-the-notes vocal style. At times, however, the window dressing can distract from the main event of the music and make things feel awkward and long-winded.

Bringing to mind the Viking fantasy of ‘Hammerheart’ at one time whilst referencing horror and science-fiction at another, the multifarious samples seem at odds with the singular heroic nature of music in this mould and serve to undermine atmosphere, rather than provide variety as was presumably the intention. In a genre that gives so much weight to atmospherics, this could be serious flaw but listen past the embellishment and there is some good quality doom on ‘Blackborne Souls’.