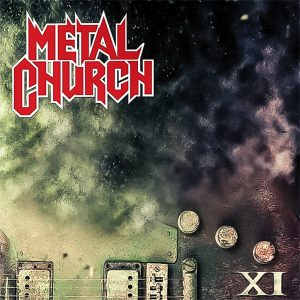 Metal Church, a band with one of the best names in heavy metal returns in full glory, with Mike Howe (1988 – 1994) holding the mic again, exposing his iron lungs for the metal masses. There’s always a touch of doubt when (especially) a singer returns from long “retirement” because the voice and its power isn’t the same as that of relearning bass, guitar or drums. Time away can be brutal for singers but not in this case. No need to talk about lost momentum, why-this and why-that, the present is the future and ‘XI’ is strong and vibrant.

As the opening track states, “Now I hit the button to reset“, it’s like we’re back in the future. We are not talking about a nostalgia album, but a solid new release, fresh and powerful, and at the same time here is a strong bond with a past. This is top-notch power/thrash metal that could kick the Big 4 anno 2016’s teeth in.

There are some similarities to the second era of Megadeth and early Metallica, but all is refreshed through the Metal Church prism which has the advantage of the positive aura and expectations this album has grown before its release. Of course nothing would matter if it was crap, but it isn’t. Riff-wise with various tempos all over the place, you can hear acoustic parts like the intro of the anthemic ‘No Tomorrow’, and also ‘Signal Path’ that leads to classic US heavy metal pathways where the voice of Howe rules. Then, you have the up-tempo galloping riffs of ‘Needle And Suture’ and the massive ‘Soul Eating Machine’, but also ‘Suffer Fools’ that has this punk vibe. Chief Kurdt (Vandehoof – guitars) is doing a great job, as usual, as the main songwriter but we should also add the wall of sound drummer Jeff Plate (Savatage/Trans Siberian Orchestra) and bassist Steve Unger have built. We have a winner here.