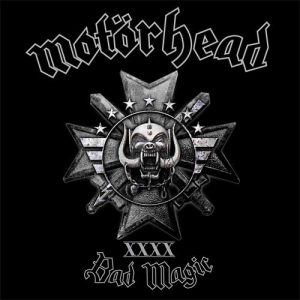 In their legendary, 40-year career, Motörhead gives fans a surprising first on their 22nd studio album: ‘Bad Magic’ is the first effort in the 23-year Campbell, Dee, Kilmister era written by the entire band while in the studio. This collaborative effort, once again produced by Cameron Webb and on the heels of 2013’s well-received ‘Aftershöck’, has produced a solid effort. ‘Bad Magic’ features a few warts, the middling ‘Fire Storm Hotel’ and the cover of ‘Sympathy For The Devil’, respectively, but for the most part it bristles with some rather cracking and inspired material. ‘Victory Or Die’, ‘Thunder And Lighting’ or ‘Electricity’ are all true-to-form Motörbanging anthems (‘Thunder…’ is being promoted as a single), but the superb ‘Shoot Out All Of Your Lights’s nasty, up-tempo defiance elicits chills and ultimately, thrills. ‘Shoot…’ is a truly exceptional track and shows that Motörhead still have plenty of aces up their collective sleeves. The calculated and cold ‘The Devil’ recalls Flannery O’Conner’s character The Misfit from ‘A Good Man Is Hard To Find’ and features a wailing guest solo by Queen’s Brian May.
‘Evil Eye’ conjures a hot, humid, snake and gator infested-swamp at midnight and stands as the best hoodoo boogie in the entire Motörhead canon. Lemmy’s whispered delivery is wickedly gleeful and makes the case that “bad magic”, regardless of the cost, might just be the way to go, bad luck be damned. ‘Teach Them How To Bleed’s punch simply rules and could stand as Motörhead’s new call to arms. ‘Till The End’ is a ballad where Lemmy, seemingly, finally faces the fact that he is mortal like the rest of us. He croons, “In my years my life has changed/I can’t turn back the time…All I know is who I am…The last one you can trust/Till the end…” ‘Till…’ teeters on the maudlin, but Phil Campbell’s beautiful solo elevates and uplifts it.
‘Tell Me Who To Kill’, ‘Choking On Your Screams’, ‘When The Sky Comes Looking For You’ and the ‘Sympathy…’ cover close out the album. Of these, ‘Choking…’ is one of the most purely snaggle-toothed and menacing songs since ‘Orgasmatron’s fantastic title track. We can only guess about what inspired ‘When The Sky…’, but once again, Campbell’s fretwork shines. The cover of ‘Sympathy…’ is a fairly straight cover, and it fits with the devilish “theme” interwoven throughout ‘Bad Magic’, but it has been covered so many times. Another Stones track, “Motörised”, if you will, might have been better suited to close out ‘Bad Magic’, although this writer wishes they would have dug a little deeper to mine the harder, more obscure, fringes of the Mississippi Delta blues artists who knew or thing or two about “havin’ the devil on their tail”.
‘Bad Magic’ makes a fine addition to Motörhead’s discography and long-time fans, especially of this line-up, will not be disappointed. Lemmy is pushing 70, and yes, his voice is not as full-throated as it once was, but he – Motörhead – are still louder than everyone else.