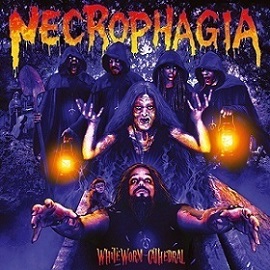 Delay amplifies expectation. Two years on from when it was originally slated, Necrophagia‘s fifth full-length since their 1998 resurrection by the riffs of an initially incognito Phil Anselmo is finally with us. Taking its cues from the stunning sidestep that was 2003’s ‘The Divine Art Of Torture’, ‘White Worm Cathedral’ may be their most straightforward album, as mainman and vocalist Killjoy recently stated, but that is no bad thing. Though Mirai from Sigh only played on ‘Divine Art’, his subtle method of soaking creepy keyboard washes in and around brutal riffs completed Necrophagia’s present-day sound. Rather than lacking in ambition, these 13 songs are the sound of a band who know both their strengths and limitations. Where Ramesses’ 2010 ‘Take The Curse’ masterpiece arguably offered a genuinely frightening integration of horror aesthetics (including meticulously integrated samples) and mauling metal riffage, Necrophagia are more like the death metal Alice Cooper. Sobering rather than disappointing, ‘White Worm…’ is a fine collection of songs but no great album – the closing title track is a definite low point. Still, with the likes of ‘The Dead Among Us’, ‘Coffins’, ‘Warlock Messiah’ and ‘Rat Witch’ some of the sharpest cuts Necrophagia have ever delivered, there is much here for which we should be thankful.