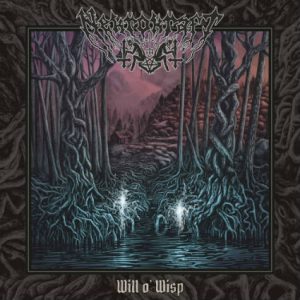 ‘Will O’ Wisp’ is the latest spawn of the Swedish blackened thrash band Nekrokraft. After two previous EPs, ‘666 Ways To Torture’ and ‘Witches Funeral (Reborn In Fire)’, ‘Will O’ Wisp’ is a hard ‘n’ fast listen at just 23 minutes. This short, sharp debut album impresses with its blasting raw guitar parts, classic melodies and rabid vocals. True to the old school Nordic extreme metal tradition but without sounding too reminiscent of one specific band, Nekrokraft achieve an authentic appealing sound by deftly executing the basics of evil metal.

The album opener, ‘Ov Hell’ offers a rough, fast tremolo picking attack, giving a rush of adrenaline and leaving us wanting more. This is followed by the title track, another frantic offering, before the band takes its foot off the gas with ‘Worship’, which offers respite with melodic guitar parts and a slower pace. This melodic tendency is developed in the following song, ‘Forest Lurker’, a longer, more diverse song which incorporates a thrash influence and sees the band change pace. The album ends with another short and fast-paced hymn, ‘Succubus’, which blends pure aggression with raging guitars and pounding drums.

A simple but beautifully orchestrated album, these Swedes have combined the standard elements of blackened thrash into to their own authentic and precious sound. ‘Will O’ Wisp’ is an appealing first full release and provides plenty of reasons to follow Nekrokraft on their dark future journey.