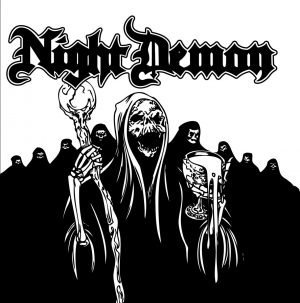 The debut EP of Night Demon, the metalheads from Ventura USA (hometown of the mighty Cirith Ungol) was like a nuclear bomb going off in 2012 and was hailed as one of the best new heavy releases of that year. It was released independently by the band, followed by more CD pressings with bonus tracks, a 7″ single release, a vinyl LP treatment by High Roller and now another expanded cassette version. That means that this release is important indeed, especially if you also keep in mind that the band’s first full-length album (‘Curse Of The Damned’) was released last year by a big label (SPV), so we guess the best is yet to come.

Heavily influenced by the NWOBHM, Night Demon deliver pure heavy metal and their anthem ‘Ritual’ sounds like an old British metal classic. While paying homage to England circa 1979-’83 they also have a character of their own, so don’t expect another retro band, but a pack of fans who play the music they would like to listen, and they do it really well, adding a live feeling into their music.

This new cassette release has four additional bonus tracks, known from previous pressings on CD and vinyl, including a Jaguar cover (‘Axe Crazy’), a Diamond Head cover (‘Lightning To The Nations’), a live cover of ‘Radar Love’ by Golden Earring and a live version of ‘Ritual’. However, this new hype of putting out cassette releases in the underground metal scene is another issue that needs to be discussed, but that’s  another story…