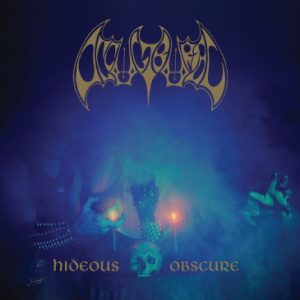 Occult Burial deal in ripping and raw black thrash, which at times musically sounds very much like early Kreator, early Sodom and early Destruction. In fact there’s a strong Germanic vibe running throughout this debut album by these Canadians, although the vocal attack is more black metal than Black Forest.

Sounding like some out-of-control, possessed musical Tasmanian devil on speed, ‘Hideous Obscure’ is snarling, seething and insatiable in it’s hunger. There’s no let-up tempo-wise either with a lot of sections racing along powerfully at breakneck speed, although they do take their foot off the accelerator at times and opt for more of a good ol’ ’80s heavy metal gallop or a hard rockin’ Venom-esque stomp, which keeps things varied.

This three-piece have a strong European sound, the drums powered along by energetic bursts of double kick, bass bulldozing through the mix and the aforementioned vocals are just plain vicious.

Did I mention riffs? This album has them in spades, and excellent ones too. They’ve taken all the best elements of ’80s thrash/speed/black metal riffing and put them together on one recording. They have the same ability as Toxic Holocaust to write memorable but malevolent thrash/speed metal.

This debut full-length will come at you from the speakers with spiteful intent and sink it’s claws into you until the last note and leave your ears bleeding. Scathing and savage!