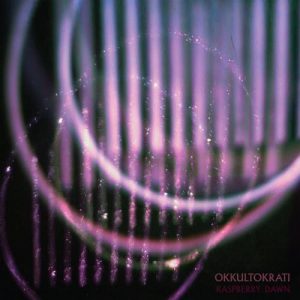 Okkultokrati hail from the forest-clad innermost recesses of Norway, in the historically axe-wielding and non-authoritarian county of Telemark – a place where apparently no learned man would dare venture until the last century. You just know these guys have been reared on a diet of “up the man” misanthropy, solitary walks through the snow but also copious amounts of indigestible moonshine drunk in the back seats of one of those massive American cars. It’s the kind of upbringing that gives rise to the most raging form of indifference, but also that gives a person time to become a walking encyclopaedia of rock ‘n’ roll’s “greatest and hatest” – something which totally comes across on their latest record. Having played their sneering, nihilistic tunes alongside the rest of Oslo’s filth punk brigade Black Hole Crew for years, it was exciting to see that a label like Southern Lord saw the light (ahem, sorry, dark) and signed the band earlier in the year. ‘Raspberry Dawn’ is Okkultokrati’s first album to be released by the Lord proper (not a reissue).

Based on the blackened punk of previous records, we were expecting a real gut-pounding guitar onslaught (although the title might have been a subtle hint that this wouldn’t quite be the case), so the total boogie fest of an opening track that followed was quite a shock to the system – it’s a pounder alright, but hell it’s so catchy! And hell, there are synths! As someone who is constantly trying to convince the more sceptical metal brethren that the line between classic heavy metal and the more epic synth-driven numbers of a certain era is a lot closer than they would have it seem, it’s a real revelation to hear a band embrace the ’80s spirit of larger-than life melody lines. Here we follow Okkultokrati into the territory of electropop-heroes such as Depeche Mode, Erasure, or the Cure, yet still manage to sound brutal as hell. In ‘Raspberry Dawn’, the melancholic but ecstatic synth lines are a sleeping army of zombies waiting to rise from the dead – buried in their coffins under layers of scuzzy guitar tones and snarly vocals akin to say Darkthrone’s recent output. As a band that have grown up with the legacy of black metal coursing through their veins, this makes total sense and for all my talk of synths they have stayed true to their roots – this is still a rock ‘n roll album, if a more layered one.

Tracks like opener ‘World Peace’ and closer ‘Magic People’ are devilishly infectious, so much so that we’ve woken up with their melodies reverberating through our collective skulls. Then, sandwiched in-between these total bangers, there is ‘Leave And Be Gone’, a slow moving, fucked up interlude which features what can only be described as a man/woman cyborg call and response duet. There are hints of both new wave and no wave, industrial undertones and middle-finger synth punk – Suicide and Swans are inevitable references, and at times, the baritone vocals bring to mind Birthday Party-era Nick Cave or Dave Gahan at his most heroin-induced (the ‘Master And Servant’ lyrical reference is gold).

Just like the tracks themselves, Henning Wisth’s vocals flip between a sleepy, drugged up sounding murmur one minute to an almost overjoyed Stooges-like wail in the next, such as on the album’s title track. The musical references are rife without ever becoming clichéd as the variation of the song writing means the album maintains ones interest throughout, oscillating as it does between catchy belters and almost industrial garage rock anthems. And as every good record, it knows when to clock out, leaving no choice but to play it again.