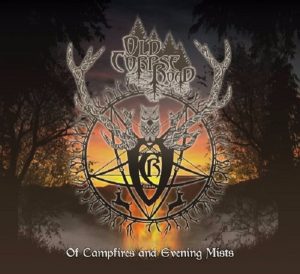 It’s a great time for British black metal, with the likes of Winterfylleth, Ninkharsag and Fen all raising the bar high. The UK is currently producing some the best music that the genre has to offer and Old Corpse Road could be set to join their ranks with second full-length ‘Of Campfires and Evening Mists’. With one album and a demo already under their belts, as well as splits with both The Meads of Asphodel and The Infernal Sea, the five-piece have already put their stamp on the scene and are causing quite a stir.

Much like their previous efforts, this record plays heavy on the themes of British folklore and mythology. With the opening song called ‘Opening The Circle’ and the last ‘Closing the Circle’, you certainly get the impression you are being invited in to hear campfire tales. These visual soundscapes are backed by booming spoken word passages and some creepy sounding organ/keys that will set cold fingers running along your spine.

The sinister atmosphere builds heavily on each track before launching into a full frontal blastbeat assault packed full of razor sharp riffs and a mixture of high pitched screams and low-end death growls. It does feel like it’s taking itself just a touch too seriously at times, however, which causes the album to come off as a little silly. Fans of ’90s black metal will surely enjoy this opus, as it has an incredibly strong (early) Cradle of Filth vibe about it.