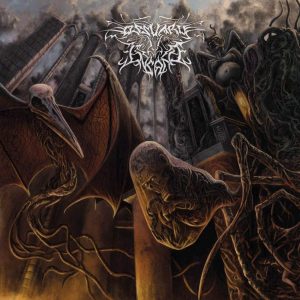 Ossuary Insane (formerly known as Ossuary) released one album back in 1998, plus a total of three demos, and then split up about ten years ago, without much fame. And that is actually a pity because these guys were actually pretty darn good, as we can now realise that fact, thanks to Blood Harvest’s re-release of some of their old material.

‘Possession Of The Flesh’ compiles ‘The Soundtrack To Human Extermination’ demo, two tracks from this demo in an older version, and three so-far unreleased tracks. With a very decent sound (for a demo), these tracks display a band in complete control, with a technical levels to be envious of, and efficient death metal delivery.

Ossuary Insane have a very strong similarity to Malevolent Creation, but they can also be fast and brutal like Suffocation, add some ‘tech-death’ touches like Atheist, or even lean towards more black metal here and there too. Too bad for them that the early 2000s were not the best period for death metal bands to get noticed, as these tracks really show a band that deserved a lot more than splitting following by anonymity…

Keep your eyes and ears open, as more deserved re-releases are planned!