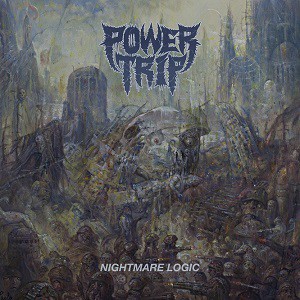 Identity anxiety on the internet can make life hard for bands following their own path through the genre matrix. Are they thrash? Hardcore? Crossover perhaps? Whilst raging YouTube commenters attempt to solve the riddles of genre and call each other “gay”, Power Trip have been busy completing their latest whiplash-inducing work, ‘Nightmare Logic’.

Immediately obvious are the lessons in leanness learned from their background in hardcore and, one suspects, butchery. Like their titles ‘Ruination’, ‘Waiting Around To Die’ and ‘Crucifixation’, they make their point quickly and clearly, having spent plenty of time at the gym training for maximum mosh effect.

Riffs are tightly-wound with plenty of Anthrax chug and perfectly placed gang vocals tempering the rage with a keen sense of hardcore Feng Shui. The production work of Eternal Champion/Sumerlands man Arthur Rizk manages to bring clarity and control to proceedings without taming or pumping everything with sonic steroids, which allows the band to go all-out-all-the-time without wearing out your ears (the same might not be said for your neck).

Despite minimal deviation from the warpath, ‘Nightmare Logic’ finds some room for subtler shades of expression with occasional synths, samples and the irresistible groove of the drums making for an arresting listen that despite being under 35 minutes, feels like the soundtrack to your life.