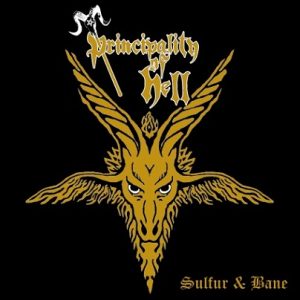 Principality Of Hell is a side-project of Thou Art Lord; its members are or have been in a good half of the key Greek extreme bands (Necromantia, Rotting Christ to name a few…) and they only have one single purpose: pay homage to the early ’80s extreme bands.

With ten of their own tracks and no less than six covers, PoH indeed conjur an album that reeks of 1984 and could’ve been a contender alongside some of the underground metal bands of that era. And the covers are poignant: Sodom, Celtic Frost, Slayer, Razor, Venom and Bathory! All these influences, up to some of the original riffs in slightly different versions, are what you’ll find in ‘Sulfur & Bane’. No more, no less! With a sound that’s pretty old school and an artwork that nods its head to Cronos and co, there’s only one way to look at this album: if you’re stuck 30 years back in time and can’t enough old school metal, then this album should be on your turntable. Or you could just look at it as a well-done homage, with heart and guts, but that doesn’t beat the originals.