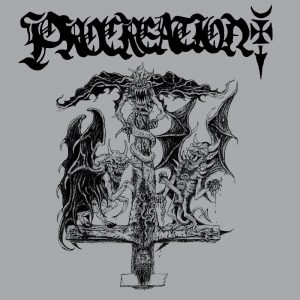 While Blasphemy are, understandably, the most likely name to come to mind when mentioning the bands that have been connected to the Ross Bay Cult, other bands such as Witches Hammer and Procreation were part of the same scene, sharing gigs and members as the need arose. The latter band formed in 1989 and, after recording two demos (1990’s ‘Rebirth Into Evil’ and ‘Coming Of Hate’ the following year) closed out in 1993. NWN first resurrected their demos back in 2004; this 2016 edition features the same track listing with a new mastering courtesy of James Plotkin.

While just using the RBC tag might lead to thoughts of spikes, bullets, blasting speed and general chaotic violence, Procreation were on a slightly different path to their more infamous counterparts. Yes, their sound is filthy and dirty, lacking in panache and polish; the quartet eschewed the contemporaneous move towards complexity and technicality for something far more primal. Think of Morbid Angel’s ‘Abominations Of Desolation’ in its scrappy bootleg form devouring early Brazillian and German thrash classics being played at half-speed and you’ll come close; while Carlo Coraza’s guitar solos bear a passing resemblance to those of Mr Azagthoth, the sound is much more loose, pounding and gnarly than the Floridian crew. There’s certainly bursts of velocity, but the general principle of the slower and harder you play, the greater the power you generate is aptly demonstrated throughout.