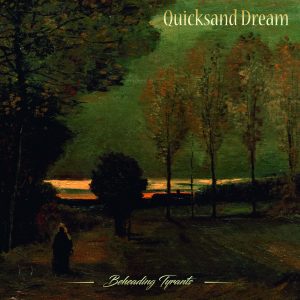 This is a unique case of a band you’ve probably never heard of. Born from the ashes of Epic Irae, Quicksand Dream took shape as a duo in 1996 with Goran Jacobson (vocals) and Patrick Backlund (instruments) keeping a very low profile and during 2000 they privately released a handful of copies of their first album ‘Aelin – A Story About Destiny’, that was released widely after a decade. ‘Beheading Tyrants’ is their new album, 16 years after their debut.

The album consists of six songs, all killer – no filler, and can be described as doomy epic metal with lots of melody. Emotional, atmospheric and heroic, it has elements that will bring to mind many bands from Black Sabbath and Pagan Altar to Manilla Road, Cirith Ungol and Atlantean Kodex, but the result has a very personal touch.

Quicksand Dream don’t feel that they have to follow a certain style or trend and ‘Beheading Tyrants’ has a strong and solid vibe from the past. The bass lines are powerful but the guitar work is the highest point on the record, it’s simply breathtaking. Underneath these songs there is a mystic aura deeply rooted in what makes this music immortal and immense. There is a certain vision here and Quicksand Dream don’t stray from it, proving that you don’t need a huge budget, hype and promotion to make a statement; just passion and guts.