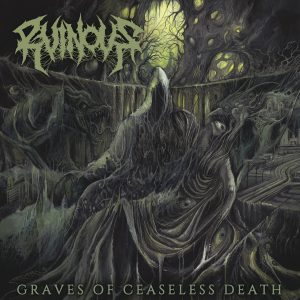 Having played together in Funebrarum, these ghouls (Matt, Alex and Shawn) decided to continue playing extreme metal and founded Ruinous, whose ‘Graves Of Ceaseless Death’ is the first album. Despite their CV, which also includes Goreaphobia and Incantation, Ruinous isn’t one of those murky DM bands. A ton of influences and extreme styles can be found therein: there’s fat Swedish death, epic heavy metal, doomy parts, thrash, grindcore, blasts, technical death, solos that Kerry King would love to write, a 10+ minutes track… in fact, name your favourite sub-genre, and there are certainly a few seconds (or more) of it on this album.

And that’s most certainly problem number one here: sure the guys play hyper well; the production is massive – and modern (maybe a question of taste) – but more is less, and there’s so much here that it stops being enjoyable.

And problem number two: vocals. Great guttural voice! But why all those ‘core’ vocals? There’s as much need for that as for a fly in a glass of bourbon. Despite all of their abilities, Ruinous will certainly sound too modern, clean, and varied for old-schoolers!