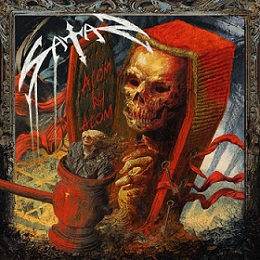 Everyone’s favourite NWOBHM demonic skeletal judge reappears! We know not how his coffin came to be exhumed, but it has been opened, the gavel has fallen, and the resultant judgment, of humanity for our considerable folly, is quite grim in its decapitating finality. ‘Atom By Atom’ is the second studio full-length by the UK’s Satan since the original lineup’s surprising reformation in 2011. What made their 2013 “comeback” effort, ‘Life Sentence’, so astonishing was how they, seemingly effortlessly, recaptured the essence of what made their brilliant 1983 debut, ‘Court In The Act’, so timeless. The band set out, in their words, to write a “direct successor” to ‘Court…’, and they succeeded beyond everyone’s expectations. To promote ‘Life…’ Satan toured the world – stepping on stages in some countries for the first time – and somehow, amidst the madness, found time to record a new effort, ‘Atom By Atom’. Is it possible to be astonished yet again? Yes. ‘Atom…’ picks right where ‘Life…’ left off and proves to be an exhilarating, wonderfully infectious listen. Although this is their fourth full-length, there is no “sophomore slump”. Call it uncanny, but the lyrical profundity, melody, speed, dynamic songwriting and dexterous playing are all intact – only better. Brian Ross’ instantly recognisable operatic vocals sound as powerful as ever. The organic, rich production is simply outstanding. Arguably, ‘Atom…’ might be Satan’s best effort, which some may deem blasphemy, but we’re brave enough to go out on that precarious critical limb because every track, there are nine, is memorable and an “anthem” in every sense of the word. What is clearly evident is that Satan, confident in their abilities, know exactly what they’re doing unlike so many other ‘80s heavy metal bands that reform only to put out subpar, completely forgettable work. ‘Atom…’ is in a word – phenomenal.